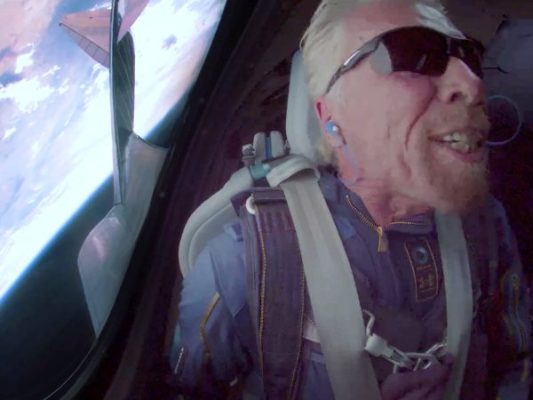 Could anything greater symbolise the rampant fossil-fuelled consumerism trashing our planet than the sight of a bevvy of billionaires competing to launch the first commercial space “tourism” flights? There was nearly zero mention of the eye-watering carbon costs of this new “tourism” in the media frenzy that accompanied Richard Branson’s space test-flight on Sunday.

The company attempted to shrug off climate criticism by admitting that each seat consumed the equivalent of a business seat flight from London to New York and that it was “offsetting” the emissions. What it did not say was that return business flights consume around six tonnes of CO2 per person or three times what an economy seat would emit. The average footprint per home in the UK, per year, is around 8.1 tonnes, according to the Committee on Climate Change’s 2014 estimates.

More importantly, it failed to mention the even worse possible impacts of space tourism by the super-elites. Some of those who can afford the £180,000 one-hour joyrides will likely be owners of private jets. Thus, for a London billionaire flying from the spaceport in Arizona, where the flights take place, you could potentially add tonnes more CO2 for them flying there on their private jet from London.

In Branson’s marketing statement he said: “I want people to be able to look back at our beautiful Earth and come home and work very hard to try to do magic to it to look after it.”

Unlike environmentally responsible bus passengers who must pay fuel duties, billionaires often find ways to pay the lowest rates of tax, and in some cases none at all. Whilst it is true that the number of people able to afford £180,000 for an hour’s joyride in the sky is limited, the real issue is how this extremist carbon consumption represents the tip of the huge unjust carbon emissions of the 1 per cent.

The UN’s Emissions Gap report from 2020 found that the world’s wealthiest 1 per cent account for more emissions than the poorest 50 per cent. An Oxfam report found that between 1990 and 2015, the richest 10 per cent blew through a full third of our remaining carbon budget to prevent global temperatures from rising above a disastrous 1.5C.

Research published in the journal Global Environmental Change found that, globally, the top 1 per cent emit half of all aviation emissions, with the average super-emitter taking three long-haul and 12 short-haul flights per year.

Branson and the other billionaires in the space “tourism” race (Tesla’s Elon Musk and Amazon’s Jezz Bezos) have plans to reintroduce global supersonic travel based on their research with space tourism. This would massively expand the emissions from the nascent industry.

Branson failed to note that while he went on a space joyride in Arizona, almost all of the state was suffering from extreme multi-year drought. In neighbouring Utah, the land was ablaze with record-breaking temperatures and wildfires. Two firefighters were killed while flying over the inferno, trying to assess the blaze.

It is clear that we have to radically curb the lifestyles of the super-rich. But before we get too smug, it is important to remember that the UK is one of the richest counties on the planet, and we too can all make positive changes to our lifestyles and policy.

We need a ban on space tourism, private jets and unnecessary frequent flying or indeed any unnecessary flights until and unless a genuinely zero-carbon form of flight is developed. A frequent flyer tax – as proposed by the recent Climate Assembly – is a laudable first step; but many of the rich would simply be able to afford to pay it and continue their climate destruction.

The climate emergency merits actions even more urgent than those taken in the Second World War, where the rich had to pitch in like everyone else and share the rationing on transport fuel along with everybody else, in the interests of fairness and winning the war we need flight rationing; not elitist space tourism – and we need it now. 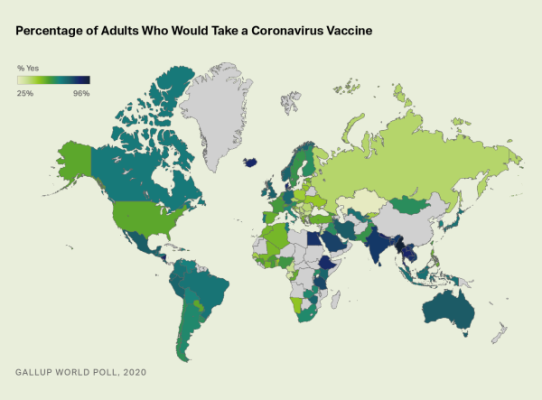 The president released a questions-and-answers video on May 15 that showed experts answering common questions from ordinary Americans. (Source: White House via Storyful)

WASHINGTON – A recent Gallup poll estimated that more than 1 billion people across the globe were unwilling to get the COVID-19 vaccine during the first year of the pandemic, making it harder for the world to reach herd immunity.

Researchers surveyed 116 countries and calculated only 68% of adults were willing to get inoculated, still below the 70-90% scientists believe is needed to reach herd immunity.

The survey also revealed that 32% of adults, or 1.3 billion people, said they would not take the vaccine.

When broken down by individual countries, Myanmar had the highest percentage of adults willing to get the vaccine at 96%. Kazakhstan had the lowest at 25%. Overall, researchers said at least 38 countries would reach the minimum 70% for herd immunity.

The study pointed out the people living in Eastern Europe and former Soviet states were the least inclined to get the vaccine.

Gallup also pointed out that the study was conducted during 2020 when a vaccine wasn’t readily available and countries were in different stages of the pandemic. The survey’s authors believe attitudes may have shifted since then as in the case of the United States. The 2020 World Poll showed only 53% of Americans were willing to get the vaccine. In March 2021, that number increased to 74%.

According to the U.S. Centers for Disease Control and Prevention, more than 130 million Americans have been fully vaccinated against COVID-19, representing 39.2% of the total US population.

The concept of “herd immunity” has been a goal since the onset of the pandemic. The term describes when enough people have immunity against COVID-19 — either from vaccination or a past infection — to stop the uncontrolled spread.

However, some US health officials believe herd immunity is unlikely. The New York Times reported that the reason is that the virus is mutating at a faster rate than vaccine jabs are being given. Rustom Antia, an evolutionary biologist at Emory University, told the paper that the virus is “unlikely to go away.”

In recent days, U.S. health officials and the White House have shifted away from setting a target percentage for the U.S. to reach herd immunity, and instead are focusing on getting as many vaccines into arms as possible amid sagging demand. Doing so will help lower virus cases, and in turn, restore a more recognizable normal for Americans, experts say.

But the Gallup poll revealed that vaccine hesitancy still remains a problem across the globe.

CDC Director Rochelle Walensky previously said the agency is working to educate people about the science, data and safety of vaccines in order to combat vaccine hesitancy.

“We believe and know that the science moved quickly. We’ve enrolled 100,000 people in these trials and the science stood on the shoulders of years and years of work before to be able to deliver these vaccines,” Walensky told reporters in April during a virtual news conference.

“If people are worried about the side effects, we can convey the data of over 200 million vaccine doses and the safety and the scrutiny of that safety,” she continued. “So we need to meet people where they are and understand why they might be hesitant and then give them the information that combats that hesitancy.”

President Joe Biden also set a new goal of delivering at least one dose of vaccine to 70% of adult Americans by Independence Day and fully vaccinating at least 160 million by then.

The Biden administration even formed a coalition of community, religious and celebrity partners to promote COVID-19 shots. It’s called the COVID-19 Community Corps. The Department of Health and Human Services said Americans can expect to see ads on television centered on the message of “We Can Do This.”

Around the globe, some Africans are hesitating to get COVID-19 vaccines amid concerns about their safety, alarming public health officials as some countries start to destroy thousands of doses that expired before use.

Vaccine-related suspicions have been spread widely on social media, driven partly by a general lack of trust in authorities. Uganda’s health minister had to refute allegations she faked receiving a shot, even posting a video of herself getting the jab on Twitter, along with the admonition: “Please stop spreading fake news!”

Austin Demby, Sierra Leone’s health minister, told reporters last week that a third of the 96,000 doses the country received in March will likely not be used before they expire, citing a lack of urgency among some people who decided that COVID-19 is “not as bad as Ebola,” which ravaged the country several years ago.